Meet your mushrooms. Get all the facts about our fantastic fungi!

Find your next product, or even learn something new! 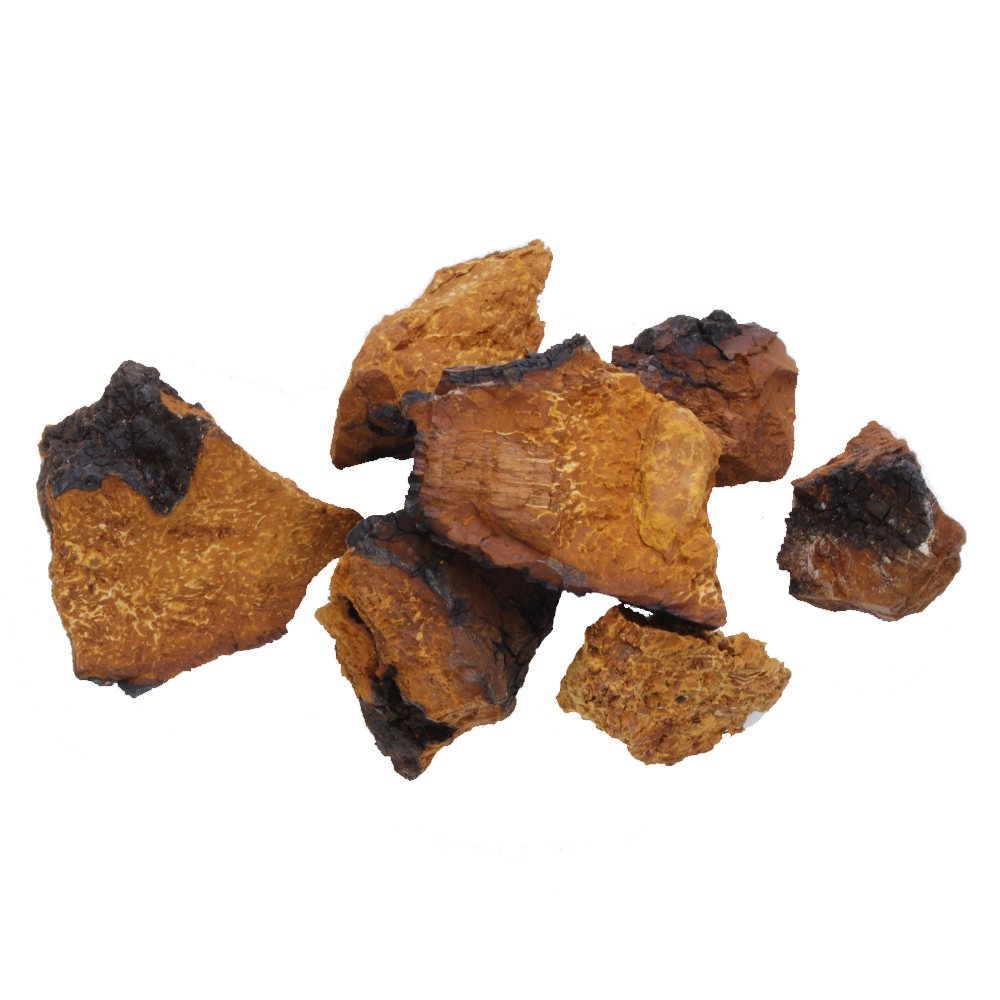 Chaga (Inonotus obliquus) is a fungus that is parasitic on birch trees as well as other trees in the Northern Hemisphere. It forms a whitish irregularly-shaped mass that turns brown over time.

For centuries, Chaga Mushroom has been considered to be medicinal.

Chaga comes from the Russian word Czaga meaning mushroom which derives from the word for fungus.

Chaga mushrooms are a folk remedy used by the native peoples of Siberia and North America to treat stomach upset, headaches, and skin irritations. The fungus is said to alleviate pain and have anti-bacterial and anti-viral properties.

Chaga fungus contains a range of nutrients including the polysaccharide Beta-D-glutan, betulin and betulinic acid, lanosterol, ergosterol, phenolic compounds, melanins, and lanostane-type triterpenoids. The polysaccharides are known to have an anti-inflammatory property and melanins promote hair and nail health.

It is believed that consuming the mushroom boosts the immune system and several of the nutrients are known to have antioxidant activity.

Laboratory and animal studies indicate there may be a number of Chaga mushroom benefits.

A laboratory study from the Department of Medical Nutrition at Kyunghee University showed that human cells treated with Chaga extract had a 40% reduction in DNA fragmentation over untreated cells when exposed to oxidative stress for five minutes. Since DNA fragmentation is believed to be responsible for some types of autoimmune diseases, this study has promising implications for the treatment and prevention of disease.

The hypoglycemic effect of the plant is documented and it could enhance the effect of insulin. 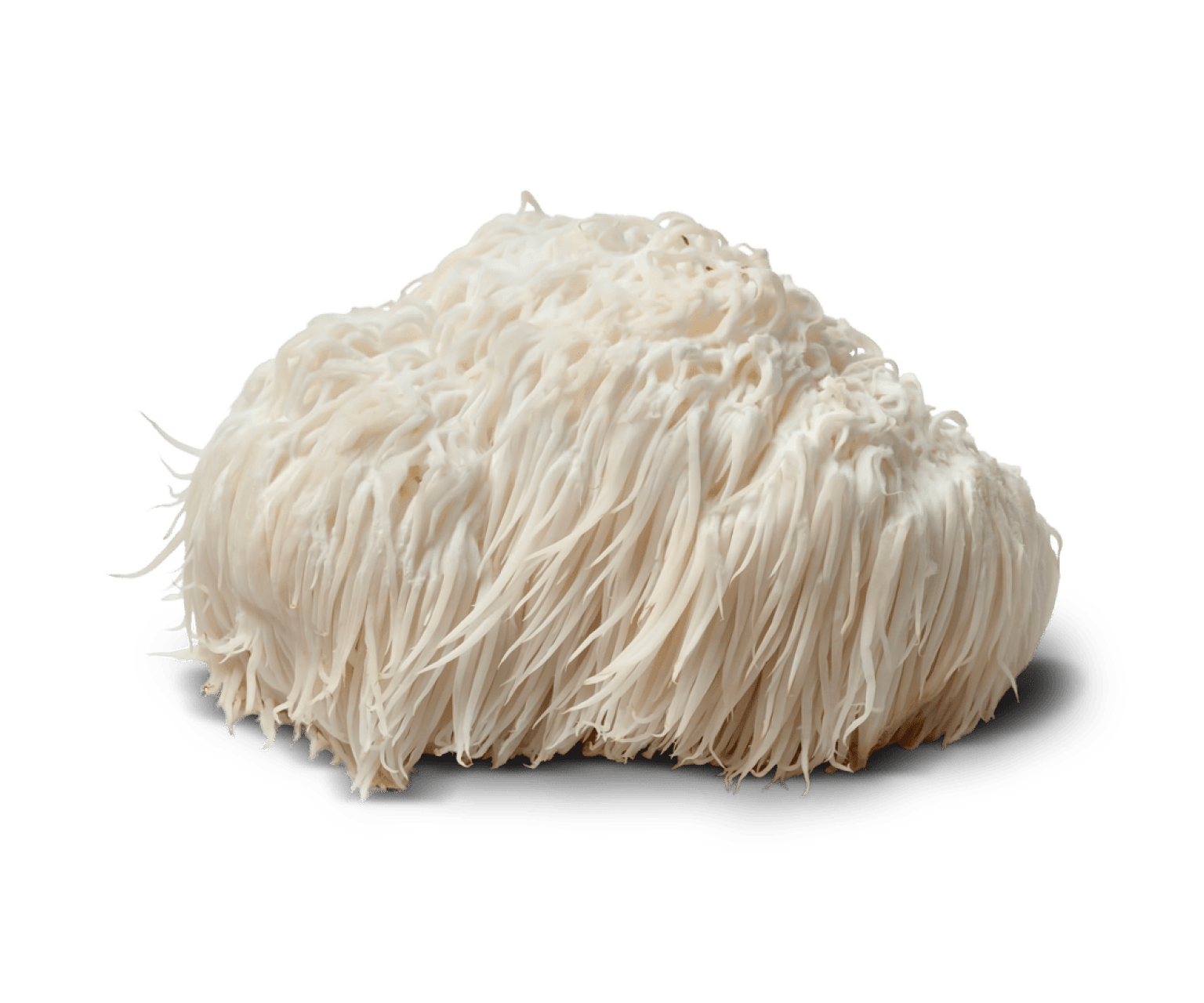 Lion's Mane may also help with some of the following:

Another four-week study using Lion's Mane versus placebo found that the Lion's Mane group had better mood and significantly less irritability, anxiousness, and depression* than the placebo group. 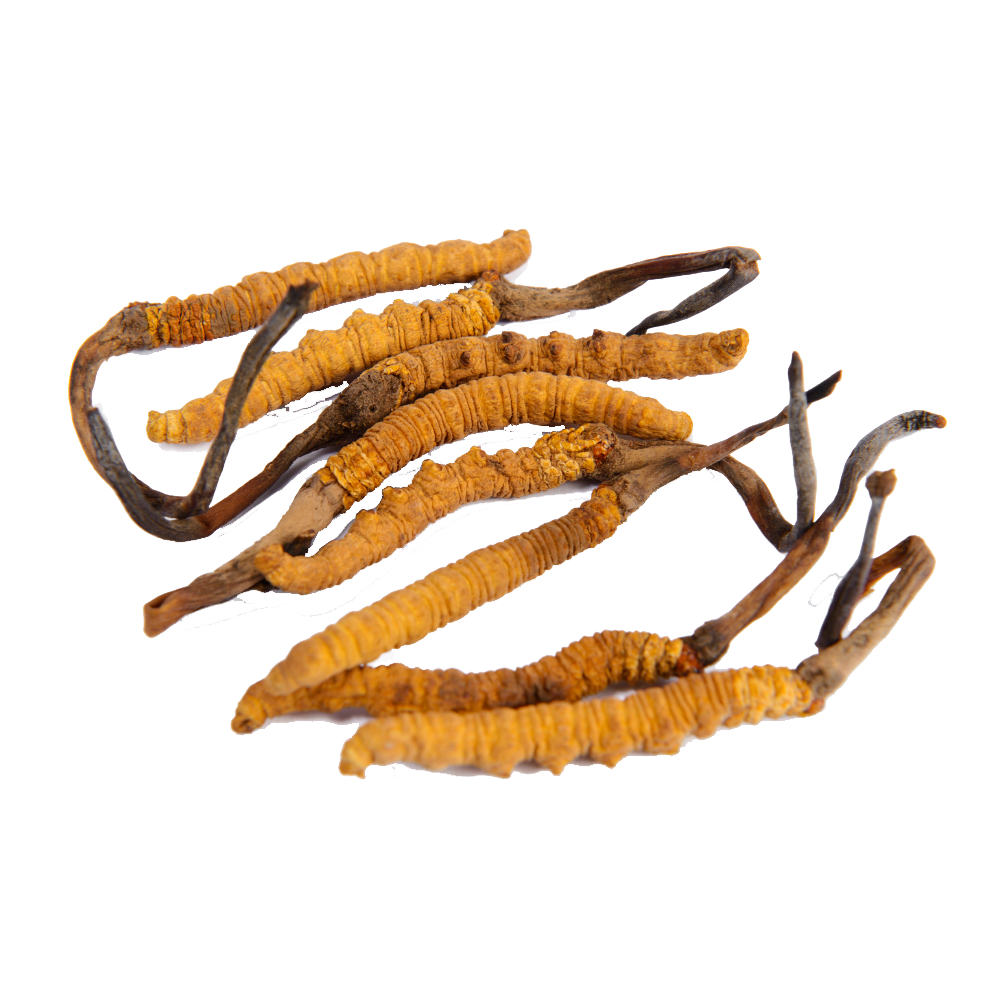 Cordyceps (Ophiocordyceps Sinensis) is a medicinal mushroom that has a long, brown to orangish-brown, finger-shaped body.

The benefits of Cordyceps mushrooms have long been studied in China.

There are many Cordyceps benefits:

Cordyceps is said to give an amazing boost for the immune system and helps the body to fight off illness and disease.

The immune system is boosted by its use. It stimulates the T-cells* which are the cells that naturally defend the body against any bacteria and viruses.

Studies done regarding respiratory systems* showed that the fungus improves, coughs, shortness of breath, and sleep. Those with more severe lung conditions benefited as well, with improved lung function and more energy. It also fights asthma and chronic bronchitis. The walls of the bronchial airways become relaxed as it is a natural anti-inflammatory.

Many athletes say that Cordyceps helps to improve their sports performance*. It has been observed in many trials that athletes who took Cordyceps actually preformed better than those that didn't. Though this has not been scientifically proven, many athletes think that trials are enough for them to begin ingesting the fungus. The mushroom also has antioxidant properties that help enhance the body's entire well-being and health.

It's also said to enhance sexual drive by helping produce more sex hormones. For women, it may help with infertility.

There are ongoing researches* about how it may help in more ways. 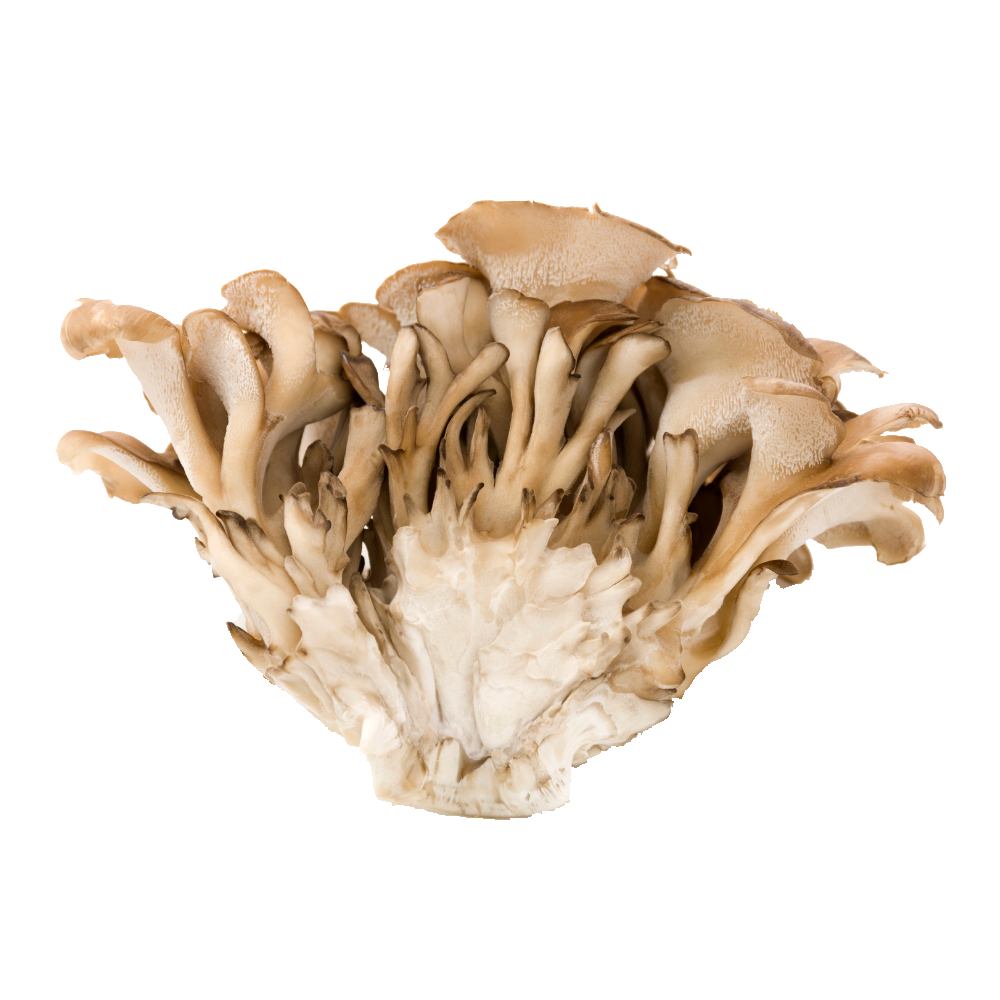 Maitake (Grifola frondosa), also called hen-of-the-woods, sheep's head, and ram's head, are polypore mushrooms (meaning instead of gills underneath they instead release their spores through their many small pores).

Maitake mushrooms are usually tan or brown and are found in Japan, China, Europe, and North America and grow in groups on the bottom of trees such as Elm, Maple, and Oak.

The Maitake mushroom has been used for many generations as a health stimulator in Asian countries such as Japan, China, and Korea. They have been so valuable at times that they were said to be worth their weight in silver. The lucky person to find them growing wild in the mountains would have danced for joy, hence the name.

The Maitake mushroom is a type of adaptogen. Adaptogens assist the body in fighting against any type of mental or physical stress. They also work to regulate systems of the body that have become unbalanced. While this mushroom can be used in recipes for taste alone, it's considered to be a medicinal mushroom.

Although Maitake mushroom has been used in Japan and China for thousands of years, it has only gained popularity in the United States over the last twenty years. People are praising this mushroom for its promises of health, vitality, and longevity.

The benefits of Maitake extract are very exciting.

Maitake may help lower blood pressure, according to some animal-based studies. For example, a study from 2010 concluded that Maitake can help combat high blood pressure, as helping curb inflammation and enhanced insulin sensitivity*.

Some animal research suggests that Maitake may help to reduce blood sugar levels. In a 2015 study, Maitake was found to have a positive effect on type 2 diabetes* through improved insulin sensitivity.

A study done in 2013 showed that Maitake extract helped lower cholesterol levels in mice. As well as helping to increase fatty acids that help provide the body energy. The researchers theorized that because of this Maitake may be able to support the health of arteries*. 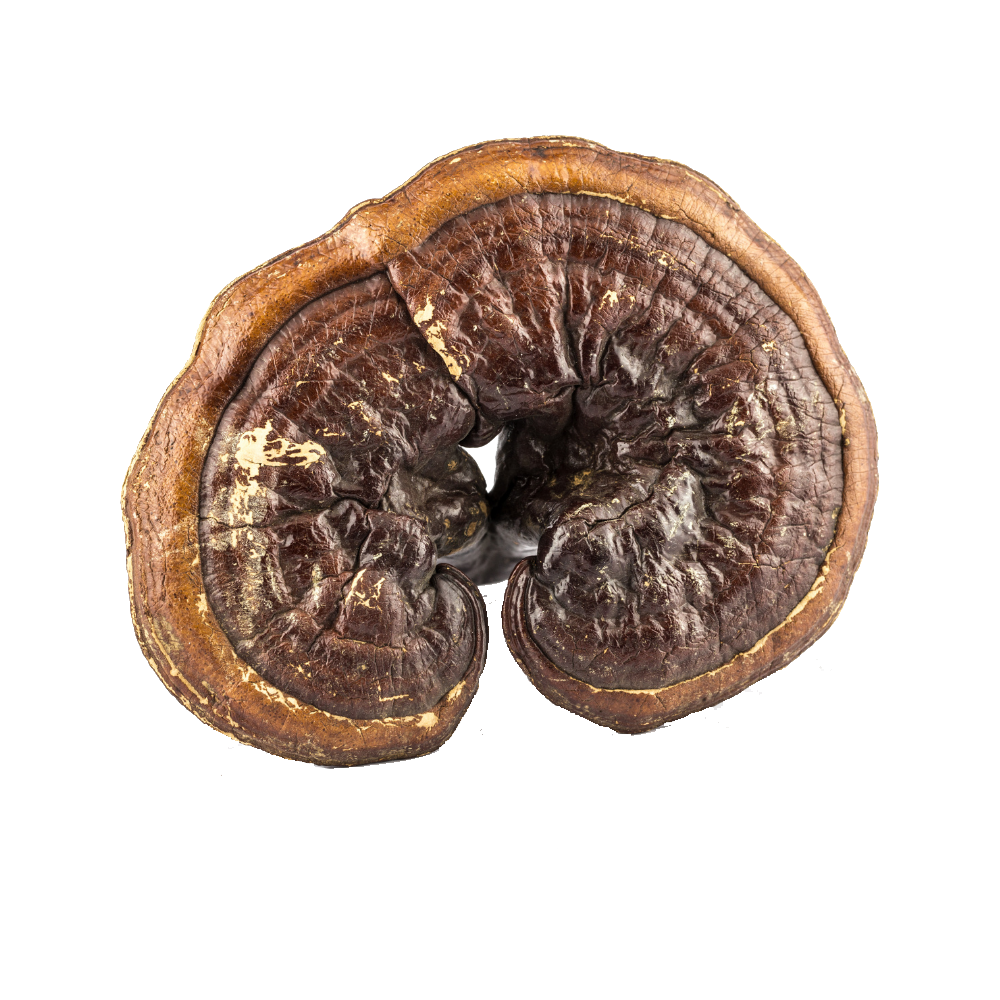 Reishi (lingzhi mushroom) is a polypore fungus that has a peripherally inserted stem with a fan-like, kidney-shaped cap that has a red-varnish color.

Reishi grows on the base and stumps of hardwood such as oak or maple, in the warmer regions of Asia, the South Pacific, southern Europe, and the south eastern United States. It can also be cultivated on logs, wood chips, or sawdust.

In Asia Reishi Mushrooms have been used for over 2,000 years and is referred to as "the mushroom of immortality" and is said to have great health-boosting properties.

Some of the benefits of Reishi Mushrooms are:

One of the most important benefits of the Reishi is that it can help boost immune function by enhancing the activity of white blood cells, which fight against infection*.

One of the main goals modern medicine has in preventing heart disease is to lower the levels of LDL cholesterol and triglycerides.

A 12-week long study* found that Reishi may help to increase HDL "good" cholesterol and also decrease the level of triglycerides. 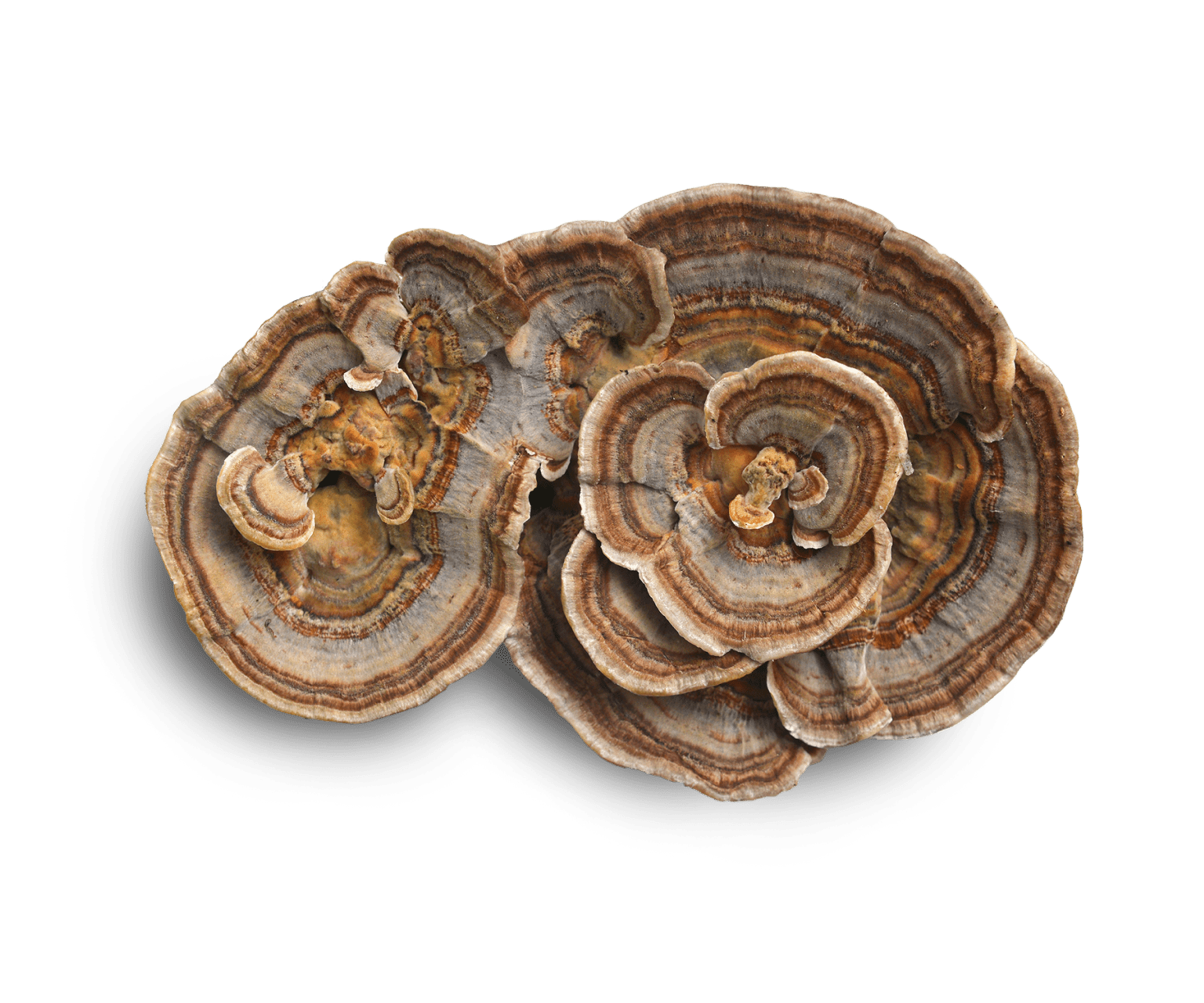 Turkey Tail Mushroom (Trametes Versicolor) is a multicolored fungus that grows in wooded areas on the stumps of trees and on fallen trees. Because of their fruiting body's fan-link shape and many colors - usually red, brown, blue, and green, they can look similar to a turkey's tail.

They grow year-round in temperate forests in many parts of the world and are very commonly found in the woods of North America and Canadian woodlands.

For centuries, people have used Turkey Tail mushrooms as an herbal health supplement.

Turkey Tail is one of the medicinal mushrooms that have a number of health benefits.

Turkey Tail mushrooms are a great source of antioxidants, such as flavonoids and phenols.

Here are just some of the benefits of Turkey Tail mushrooms:

Studies done on Turkey Tail mushrooms (Trametes Versicolor*), taken on various forms such as whole food, tea, powder, or capsules, have shown that it has significant immunity-boosting benefits. It seems that Turkey Tail mushrooms help to stimulate and activate immune cells to help strengthen and increase our body's immune response.

A recent study concluded "The mycelium of the Trametes Versicolor (Turkey tail) mushroom and its fermented substrate each show potent and complementary immune-activating properties". Helps Improve Gut Health. Turkey Tail mushrooms contain prebiotics that helps improve your balance of intestinal microbiomes by increasing the "good" bacteria and suppressing the "bad" bacteria, which is very important to overall health and wellness.

One study showed that the polysaccharopeptide* contained in Turkey Tail mushrooms "acts as a prebiotic to modulate human intestinal microbiome composition".

There is even some research that the (PBG) protein-bound beta-glucan contained in Turkey Tail mushrooms can help prevent obesity.

Studies found that PBG seems to help balance intestinal bacteria, which can help fight obesity*. Also, a study on mice concluded that PBG may help prevent weight gain in subjects that consumed a diet high in fat. 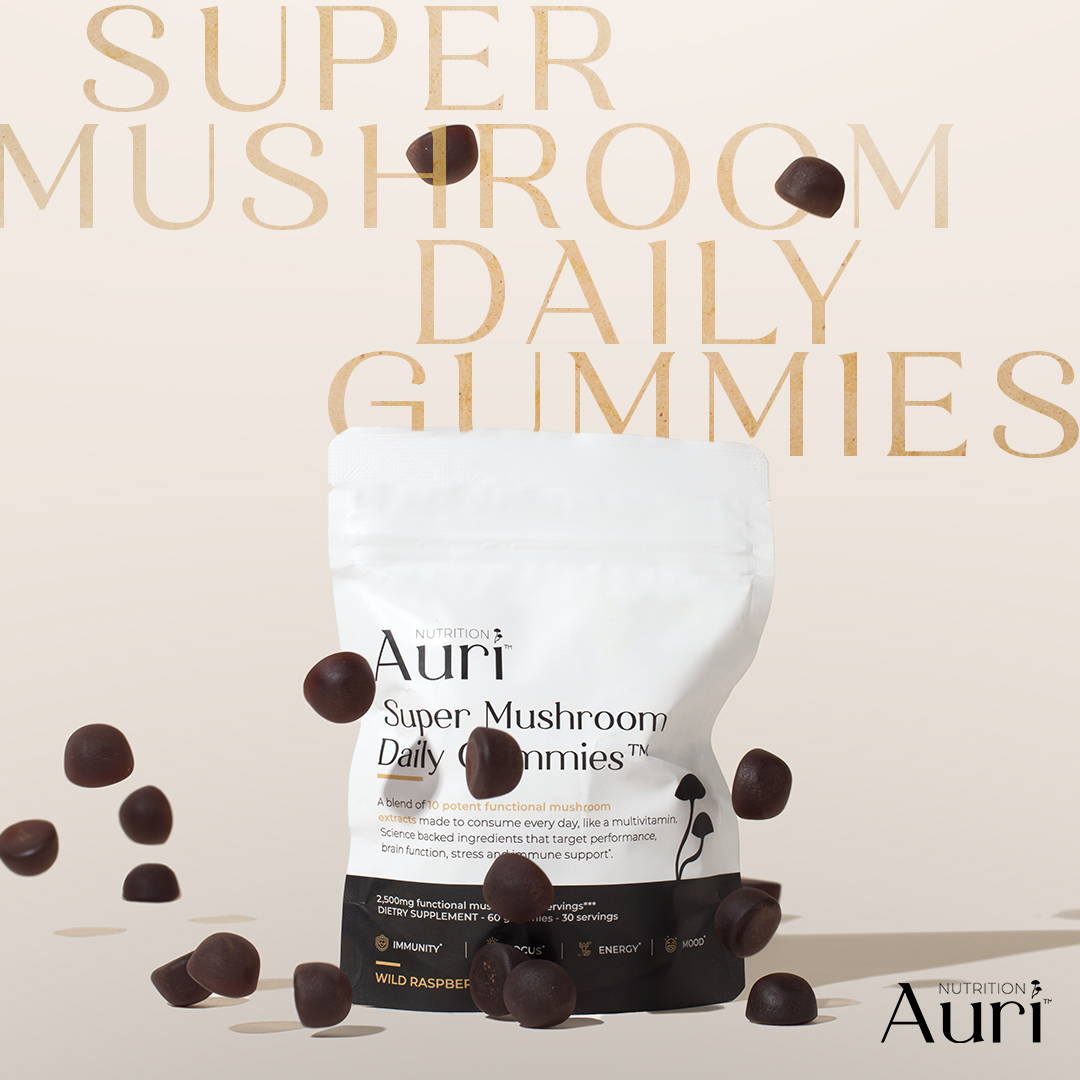 🍄 Packed with 10 adaptogenic functional mushroom extracts made to consume every day, like a multivitamin. Science backed ingredients that target performance, brain function, stress and immune support.